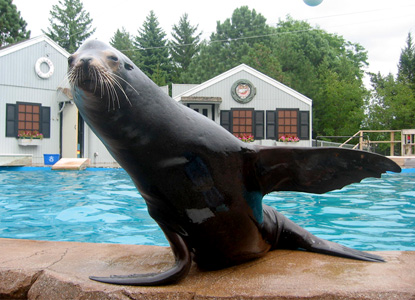 Slick, our dominate male sea lion is a favorite for trainers to work with. He is always anxious to learn new behaviors and is the ham of the group. He is currently 26 years old. Male sea lion weights fluctuate according to the season. During the summer months Slick is usually a very trim 450 pounds however as winter approaches his weight increases quickly. By February he often tops the scale at close to 700 pounds. Full grown Slick is an impressive 9 feet in length. Being the dominant male, Slick controls the mood of the entire colony of sea lions at Ocean Connections. Fortunately Slick is even tempered, patient and very gentle with all of his pool mates. Slick can often be seen interacting with the public for presentations and is a favorite in our interactive programs. Slick’s favorite pastimes include getting back rubs from his trainers and spending time with his female companions Makaia and Abby.