Harbor seals have small front flippers only about the size of a human hand. They also lack external ear flaps or pinnae. Instead, they have internal ears so all you are able to see is a small hole or bump about an inch behind their eye. Harbor seals' color varies but they often have a blue-gray back with light and dark speckling. They have short, dog-like snouts.

Diet in the Wild: Mainly fish, shellfish, and crustaceans
Habitat:

Harbor seals live in temperate coastal habitats and use rocks, reefs, beach, and drifting glacial ice as haul out and pupping sites. Harbor seals haul out on land for rest, thermal regulation, social interaction, and to give birth. Seals also haul out to avoid predators.

Harbor seals mate at sea and females give birth during the spring and summer; although, the pupping season varies with latitude. Pups are nursed for an average of 24 days and are ready to swim minutes after being born.

Harbor seals are classified as Low Risk-least concern on the IUCN Red List. Harbor seals are protected by The Marine Mammal Protection Act of 1972 making it illegal to hunt or harass any marine mammal in U.S. waters.

Threats in the Wild:

Fun Facts: Harbor seal pups can swim at birth and can dive for up to 2 minutes when they are only 2-3 days old.
Video: 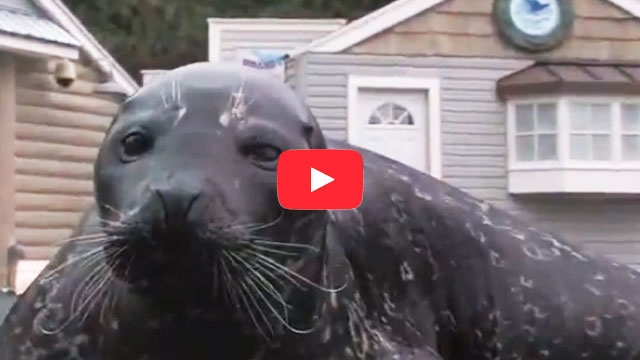